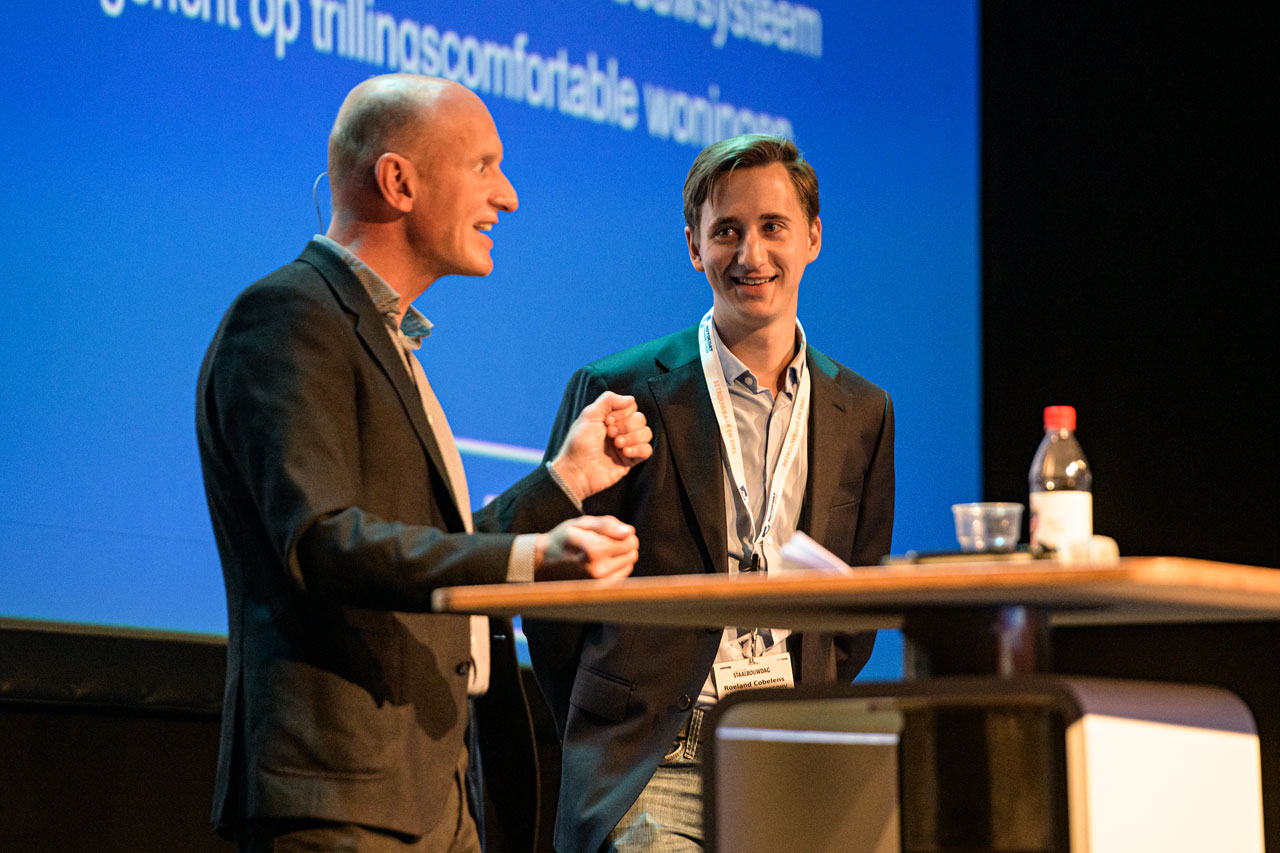 Limitations in the modern housing market supply and the high demand for city centre living space ask for a robust urban densiﬁcation way of building. This results in the exploration of innovative vertical extension projects, such as the ‘De Karel Doorman’ case in Rotterdam. However, demanding the construction method to be extreme lightweight revealed an unexpected normative service ability phenomenon. The reduced mass did not dissipate enough vibrational energy induced by human activities such as walking, leading to an excessive and disturbing perception of vibrations. This caused nuisance for both the home situation where the motion takes place as for the neighbouring ﬂoor ﬁelds. The critical motion-related limit state has to be satisﬁed to create a comfortable living environment.

This thesis aims to further develop the concept to flight-weight steel and timber building structures focusing on vibration comfort. This is done by exploring structural measures that can steer the vibrational ﬂoor response for both the induced situation as for the transmittance to adjacent ﬁelds. Broadening research shows the general impact of the damping, natural frequency and modal mass. From this starting point, new practical building tools are developed to affect and control the path and magnitude of vibrations positively. General guidelines are provided that show the demands for a structural assembly to create suitable apartments.

The proposed measures to steer the vibration comfort were researched using both the conventional hand calculation method from the SBR-guideline and by more accurate ﬁnite element analyses from SoViST and Autodesk Robot. The resulting OS-RMS90 values indicate the response velocity of the ﬂoor and have to meet the limit criteria proposed for the speciﬁc function of a building. For the light-weight residential building concept, these criteria were set to 0,8[-]and0,2[-] for respectively the home and neighbouring situation. 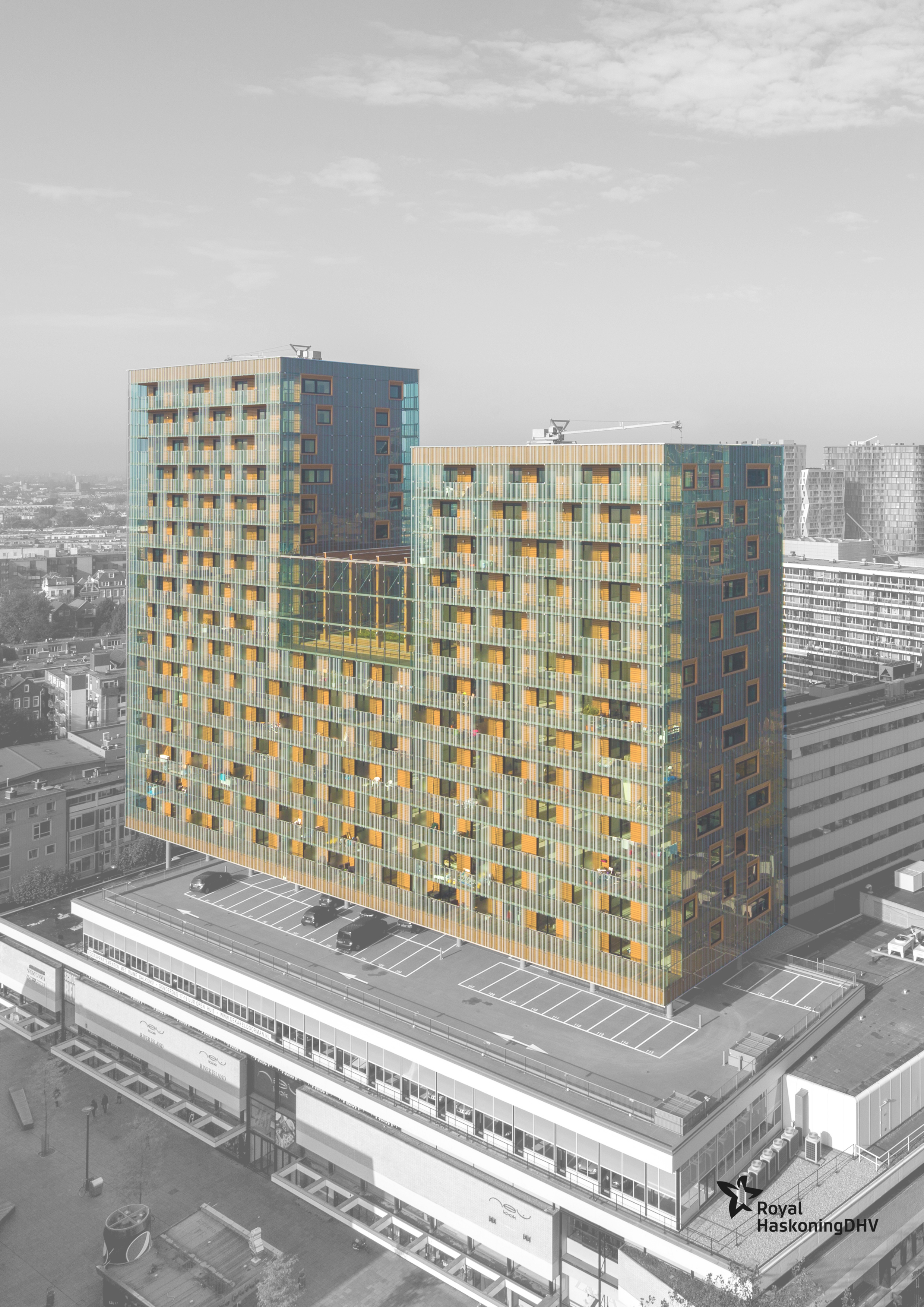 It was found that for light-weight building structures the implementation of a large amount of stiffness is inevitable in both the ﬂoor assembly as in the junction. The consequence of additional mass and height can be balanced by using efﬁciently shaped proﬁles and smart placement of the joists. For the supporting beams, these demands encourage the use of rectangular hollow structural sections whereas for the ﬂoor assembly I-joists are recommended. Additional transverse stiffness stretches the clustering of natural frequencies for orthotropic plates but is most effective for two-way span ﬂoors. A smaller span will result in improved comfort levels but will complicate the structural assembly by introducing more elements and connections. Besides the overall performance enhancing measures, it was found that the limit criterion for neighbouring apartments is harder to achieve without additional interventions. Introducing more substantial obstacles for the vibrations to overcome along the path, will reﬂect the transmittance and hence steer the ﬂoor response towards improved comfort levels.

The use of an alternating ﬂoorﬁeld can provide in this issue as it avoids the mode-coupling of natural frequencies from adjacent elements. One other recommendation is the differentiation of the home-separating and in-home junctions. This results in maintaining more vibration energy in the home situation and limits the nuisance caused from excitements in a neighbouring apartment.

The as-built ‘De Karel Doorman’ revealed the impact of additional stiff elements in the wall that substantially increase the bending and torsional stiffness in the junction. It was found that these elements mitigate the nuisance caused by footfalls to imperceptible values for adjacent ﬂoorﬁelds. However, these elements do leave a mark on the ﬂexibility of the ﬂoorplan.

Light-weight building structures face new challenges and acknowledge the shift from strength-design to serviceability-design criteria. Regarding vertical extension projects, not just the building engineering aspects but also the practical implementation was found to contribute in the consideration for structural assembly measures. 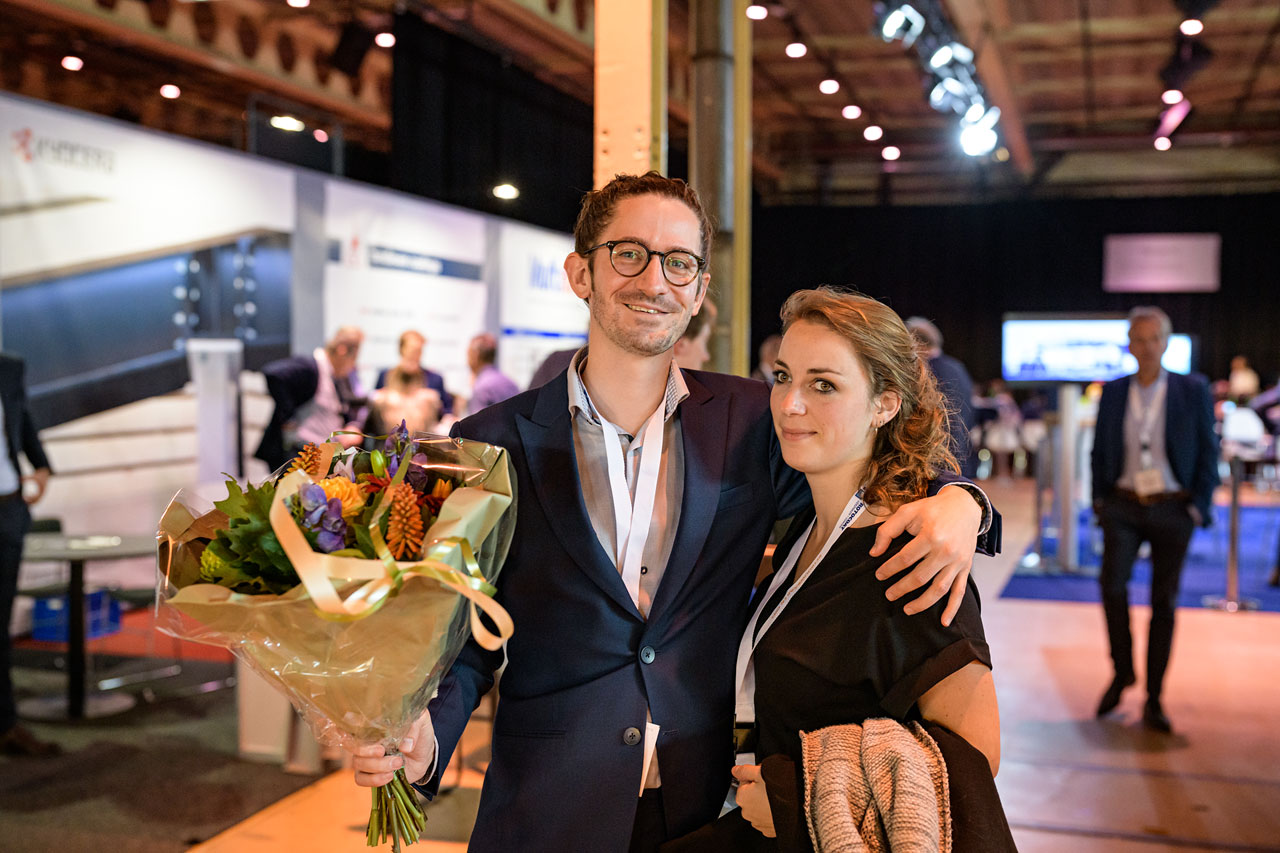 The re-use of building components and structural elements is an underdeveloped practice which could be an important strategy in the global paradigm shift towards a circular economy. Steel is one of the most important structural building materials which combines incredible strength, favourable mechanical properties and excellent durability characteristics. It is practically infinitely recyclable and raw materials required for the production of steel are abundantly available in the Earth’s crust. This makes steel one of the most interesting sustainable engineering materials. However, the production process requires vast energy investments and produces considerate environmental pollution. To make steel an increasingly sustainable material and a frontrunner in the global transition towards a circular economy, significant investments and process improvements are necessary.

The re-use of structural steel elements could offer great potential in reducing both the embodied environmental impact of construction works as well as the vast waste streams that result from demolition. There is general consensus on the technical feasibility of this circular alternative across academic literature and the idea enjoys widespread scientific support. Actual implementation is however limited, presumably due to the existence of several multi-level barriers. A diversity of actors along the value chain have indicated that various attitudinal, financial, structural, operational, technological and legislative barriers are preventing widespread adoption. Although some of the identified issues are of a practical nature, various perceived barriers have been identified which were found to be rather subjective. It is to be expected that providing additional information on the risks and opportunities, and by quantitative demonstration of the potential benefits of re-use, several of these perceived barriers could be alleviated. This thesis aims to integrate the potential use of circular steel elements in the structural design process for steelworks as a sustainable alternative to the use of new steel. The developed method allows structural design & engineering professionals to assess the environmental impact of structural steel frameworks with increasing accuracy. Furthermore, it improves the current practice by making the design process reuse-inclusive. It thereby provides design professionals with a tool to assess and communicate the possibilities of improving a design with regard to their inherent sustainability. It was found that the currently prescribed ‘fast-track’ LCA method, aimed at quantifying the embodied environmental impact of building structures, is highly sensitive and the current method could be leading to large inaccuracies and spread of misinformation. 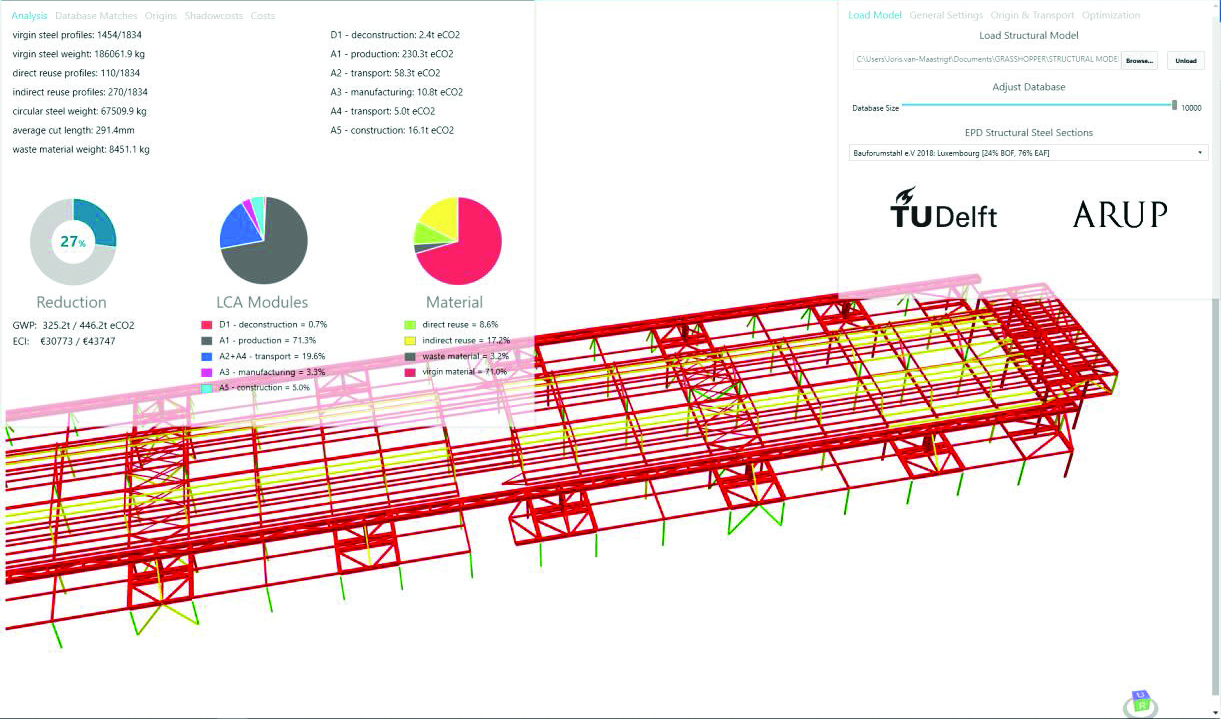 Two dominant national LCIA methodologies have been extensively compared and a sensitivity analysis has been performed for a variety of data resources. It could be concluded that the prescribed national data for steel products contained in the NMD is unverifiable and inconsistent with other resources. This raises serious concerns with regard to the accuracy and reliability of currently used ‘fast-track’ LCA methods for the Netherlands. It was calculated that the specific LCIA method used and the selection of modules included in the assessment can cause deviations of the estimated shadowprice up to approximately 424%. Subsequently, a tool was developed based on the CML methodology to validate the potential deviations that could arise from selecting a specific data resource. The application analyses and evaluates structural steel frameworks with regard to their inherent environmental impact. Furthermore it allows the engineer to select and substitute new steel elements with remanufactured counterparts found in a circular steel database. A case study was performed for four different scenarios. Both the LCIA method as well as the considered modules were consistent for all scenarios. From the results it could be concluded that the estimated shadowprice is also highly sensitive to the specific data considered. It was indicated that the input data can lead to deviations of the shadowprice of up to approximately 281%. Furthermore, it was calculated what the potential benefits of reuse would be. It was calculated that substituting 25% of the required steel could lead to reductions of approximately the same magnitude by eliminating the required process for production and cutting the transportation requirements. From the results of this thesis it could be concluded that there is serious inconsistency and limited transparency among the various data resources used for quantifying the environmental impact of steelworks. It is to be expected that the actual shadowcosts deviate significantly from the estimations provided by current assessment methods used in the Netherlands. Failure to accurately quantify the impact of primary building products could lead to significant errors as these materials have a relatively large contribution to the total impact of a building structure. Subsequently, this could lead to misinterpretation of LCA results thereby providing a misleading message for policy- and decision makers. However, it was also illustrated that the remanufacturing and reuse of structural steel profiles could offer significant environmental benefits and has the potential to significantly cut the environmental impact of structural steel framework constructions. 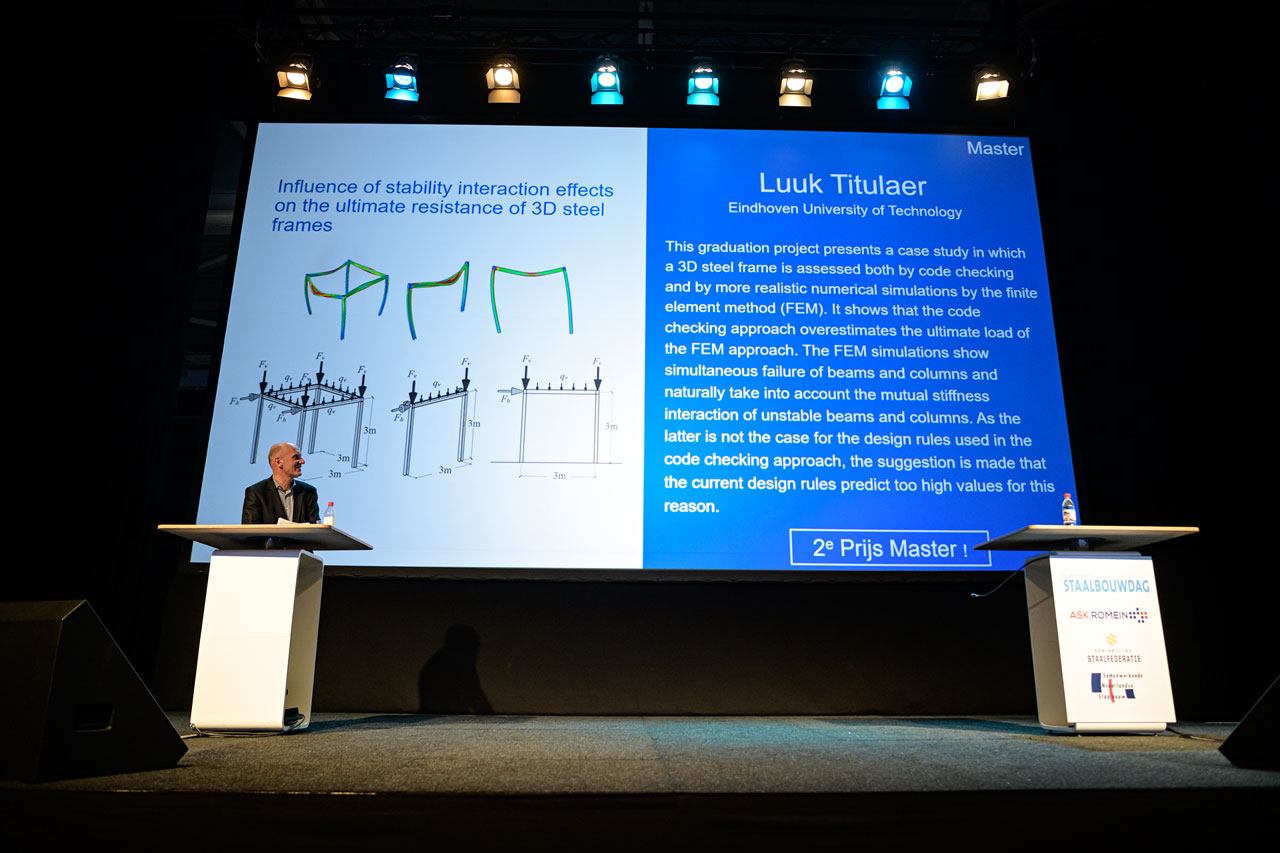 The safety of steel structures is guaranteed by Eurocode 3 by prescribing design rules. Because steel structures can be complicated and are more likely than not composed out of multiple elements, these design rules presented In EN 1993-1-1 need to be applicable for all of these structures. Eurocode 3 states that all structures should be verified in the ultimate limit state but on the basis of individual single members. However, structures act as a whole which means that the interaction between these elements should be covered as well. The unawareness if this interaction is covered by Eurocode 3 was the main reason for this graduation project. The interaction between bending, compression and torsion can be tested according to the codes, but only for separate elements. Questions rose about the influence of interaction of stability failure modes between multiple elements on the ultimate resistance of the total system, especially the stability interaction effects in 3D steel frames. Therefore, this research was focused on simultaneous buckling of multiple elements being part of a system for which Eurocode 3 design rules were compared with the most sophisticated analyses namely GMNIA. In a literature study more knowledge was gained about buckling of steel members. This also provided a basis for the comparison between Eurocode and GMNIA results. All aspects included in the geometrically and materially non-linear analyses with imperfections (GMNIA) and the finite element analyses were investigated in this literature study. 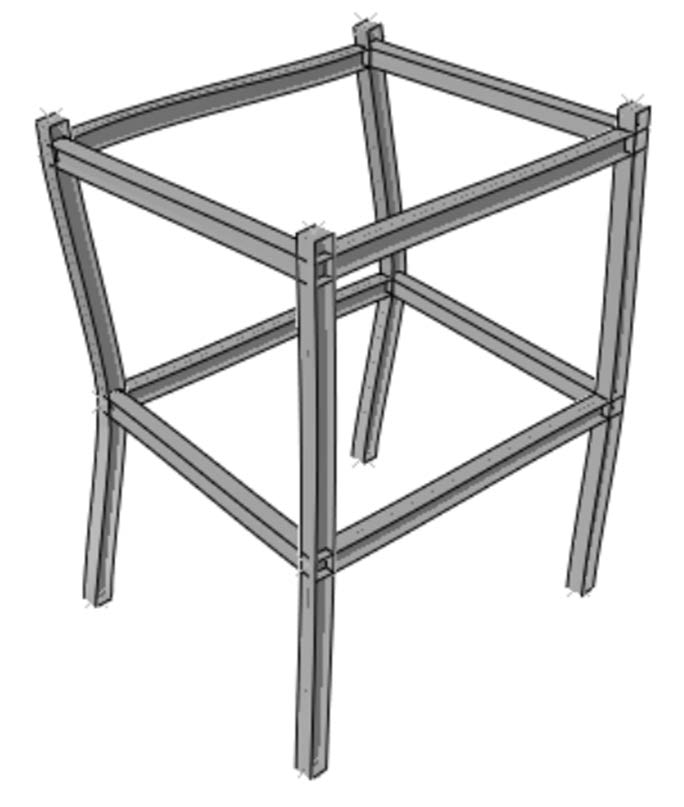 Literature about the buckling of a two-dimensional sway frame and a three-dimensional steel space frame was used as a basis of validation of the finite element analyses executed by the non-linear finite element analyses software ABAQUS. The validation of the finite element model was a base for testing of multiple factors necessary in the final GMNIA such as element type and method of including imperfections. It was concluded that using a linear combination of scaled eigenmodes resulted in a good representation of geometrical imperfections. A so called one bay one story three-dimensional steel space frame in which members buckle simultaneously was used for the comparison between GMNIA and Eurocode calculations. The interaction of buckling between a column and a beam was found by considering a number of load combinations. The comparison between EN 1993-1-1 and a GMNIA gave an answer on the research question. It gave the insight that a three-dimensional structure in which members buckle simultaneously is not well-enough covered by Eurocode design rules. Both the sway-mode buckling length method and the amplified swaymoment method resulted in a higher ultimate resistance than the GMNIA. If a more exact method of determination of Lcr , Ncr  and Mcr  was used than prescribed by Eurocode 3, the comparison between EC3 and GMNIA came closer. However, the Eurocode design rules only were conservative if the interaction was investigated for a two-dimensional structure.